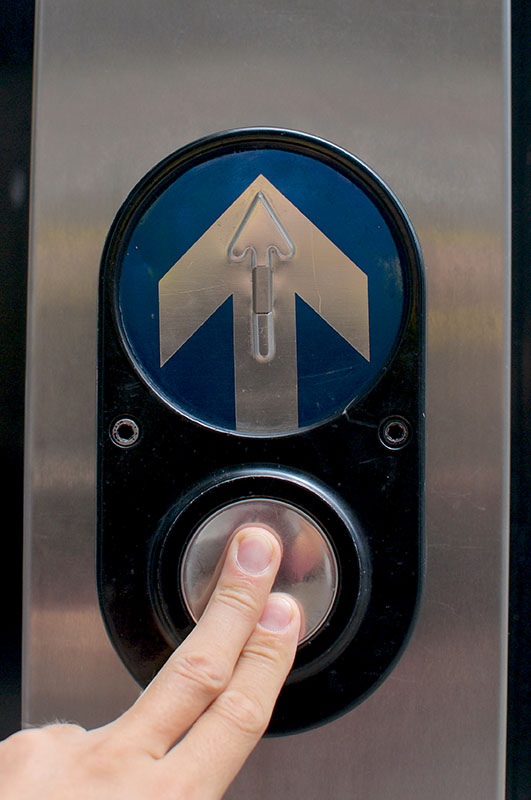 The purpose of this article is to present some basic concepts of how to build situational and security awareness with employees to reduce the risk of security incidents and criminal activity.  This will be done by illustrating a simple three-step process:

What does “taking it to the next level” mean?  Let us turn our attention to the concept of situational awareness and hear what some of the experts have to say.  This military and policing concept can be applied in the private sector to your employees.  For the average employee, there are a few key points to emphasize that will gain incremental improvements in security awareness while recognizing that people typically operate on five distinct levels of awareness.  The late Jeff Cooper’s “Color Code” has been embraced and taught by competent instructors for many years. Some of you may be familiar with the concepts, but a review of these awareness levels is worthwhile in the context of situational awareness. Cooper broke down alertness levels into five degrees of preparation and awareness as depicted in the graphic below. 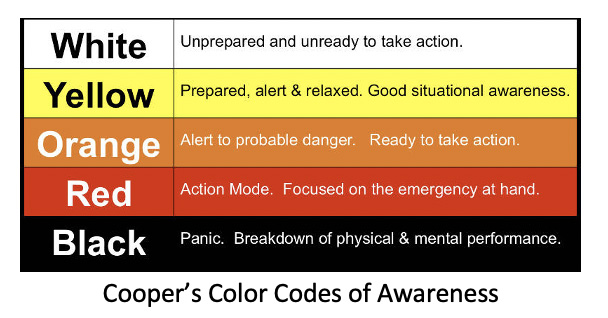 Unfortunately, far too many people operate in the white dimension, “unprepared and unready to take action”.  What are some of the common behaviors we exhibit that undermine our ability to observe what is happening around us?

Therefore, the first objective in any security and situational awareness training program is to teach people the difference between white and yellow dimensions, then to encourage them to develop a sense of self-awareness to stay out of that dangerous “unprepared and unready to take action” mode.

To help employees develop basic alertness skills, they can be challenged to practice a few drills that are often referenced in the situational awareness discussion which include:

Educating employees to actively engage their environment will train them to be aware of factors in their surroundings almost subconsciously when they learn to regularly operate in the “yellow” state of awareness.

Once that self-awareness is established and people are actively engaged with their surroundings, then you can focus on teaching more advanced situational awareness skills that can be applied to a variety of circumstances applicable in a wide array of work environments (e.g., healthcare, corporate, K-12, critical infrastructure).

To borrow from another military training concept and apply it in civilian life, the OADA Loop is a learning system and decision-making process that was first presented with a slight variation by John Boyd, an Air Force fighter pilot and military strategist. The four steps of the OADA Loop are Observe/Observation, Analyze, Decide, Act.  For this article, we are only going to focus on the first two steps in the process.

Observation, which requires conscious thought and practice, is a very deliberate action that employees need to be taught and reminded about.  This secondary skill should convey the importance of developing mental “baselines” for people and environments.  Having a baseline is an essential foundation to be able to detect anomalies which are important to trigger action or reporting of suspicious activity.  The “environmental baseline” is what employees have experienced in similar environments and situations. They should be trained to determine what is considered normal sounds, behaviors and sights so they have a frame of reference to better identify unusual behavior or anomalies

By establishing an understanding of the baseline through observation of daily routines, employees will quickly notice when something deviates from the pattern.  Everybody has some understanding of the baseline around them, which will differ by environment and situation.  Those skills can always be refined.  Another way to identify a baseline is to teach employees to ask themselves some basic questions1:

It would be a good exercise in a training session to have employees ask these questions and collectively contribute to the baseline in their assigned work environment.  This will help get a better grasp of the concept and prepare them for the next key skill–recognizing and responding to anomalies.

Teaching the Importance of and Response to Anomalies:

Obviously, the “observe” step is what most people associate with the concept of situational awareness, but the reality is we also need to incorporate the second step, “analyze,” to truly achieve situational awareness.  Analyzing what we observe puts those observations into a context against a baseline of what is normal so employees can recognize deviations/anomalies and make a game plan such as reporting suspicious activity or removing oneself from a situation to create the time and distance necessary for a safe outcome.

Anomalies are things that either do not happen that should, or that happen and should not. Employees must be trained to recognize and respond to anomalies.

Then to help analyze anomalies, “What would cause someone or something to stand out?”  For example, most people are going to look relatively comfortable in most situations. Think about a bus or a subway ride — passengers generally appear relaxed while they stare out the window or read a book. If someone looks uncomfortable, that is an anomaly that warrants extra attention but does not mean that a person is necessarily a threat, just something employees should be trained to monitor.

Patrick Van Horne, author and founder of The CP Journal, a behavioral analysis training company, says that a common display of uncomfortable behavior by individuals up to no good is when a person looks over their shoulder to see what’s behind them or checks their surroundings constantly.  This is also referred to as scanning – when a person is continually looking around in all directions and showing situational awareness.  People who are comfortable generally do not “scan” because they don’t feel any threat. So, if you see a guy looking over his shoulder a lot when he should be standing there, that’s an anomaly that warrants additional attention and potentially an upgrade from yellow (prepared and alert with good situational awareness) to orange (alert to probably danger, ready to take action or make a report of suspicious activity).

On the flipside, someone acting comfortable when everyone else is uncomfortable would be an anomaly. One of the ways law enforcement was able to identify the Boston Marathon bombers was that they noticed in surveillance footage that the men looked relatively calm while everyone else was running around in a panic. The reason they looked calm was because they knew the explosion was going to happen and thus were not surprised by it, while everyone else was caught off guard.

Here are some negative anomalies (something missing) which should lead to action:

Here are some positive (something extra) anomalies that can be included in employee training:

When anomalies are observed, employees must be trained to spring into action either by removing themselves from a potentially dangerous situation or to file an immediate report about something suspicious and out of the ordinary so that the appropriate security or police agencies can intervene.

This article presented three steps to build situational and security awareness with employees to reduce the risk of security incidents and criminal activity.  The steps are:

In essence, without these extra steps, “See Something, Say Something” will be nothing more than a catchy phrase that under performs.

1 Some of this information was presented by Michael Rozen at ASIS International in 2019 in an excellent session.

Archives
Categories
Follow Us
Eliminate Crime Before It Happens
Contact Us
Copyright Business Protection Specialists, Inc 2022 All Rights Reserved. - Site by nothing but net solutions
Back To Top